Home / NBA / Every Seahawks game is dramatic, even when it shouldn’t be

Every Seahawks game is dramatic, even when it shouldn’t be 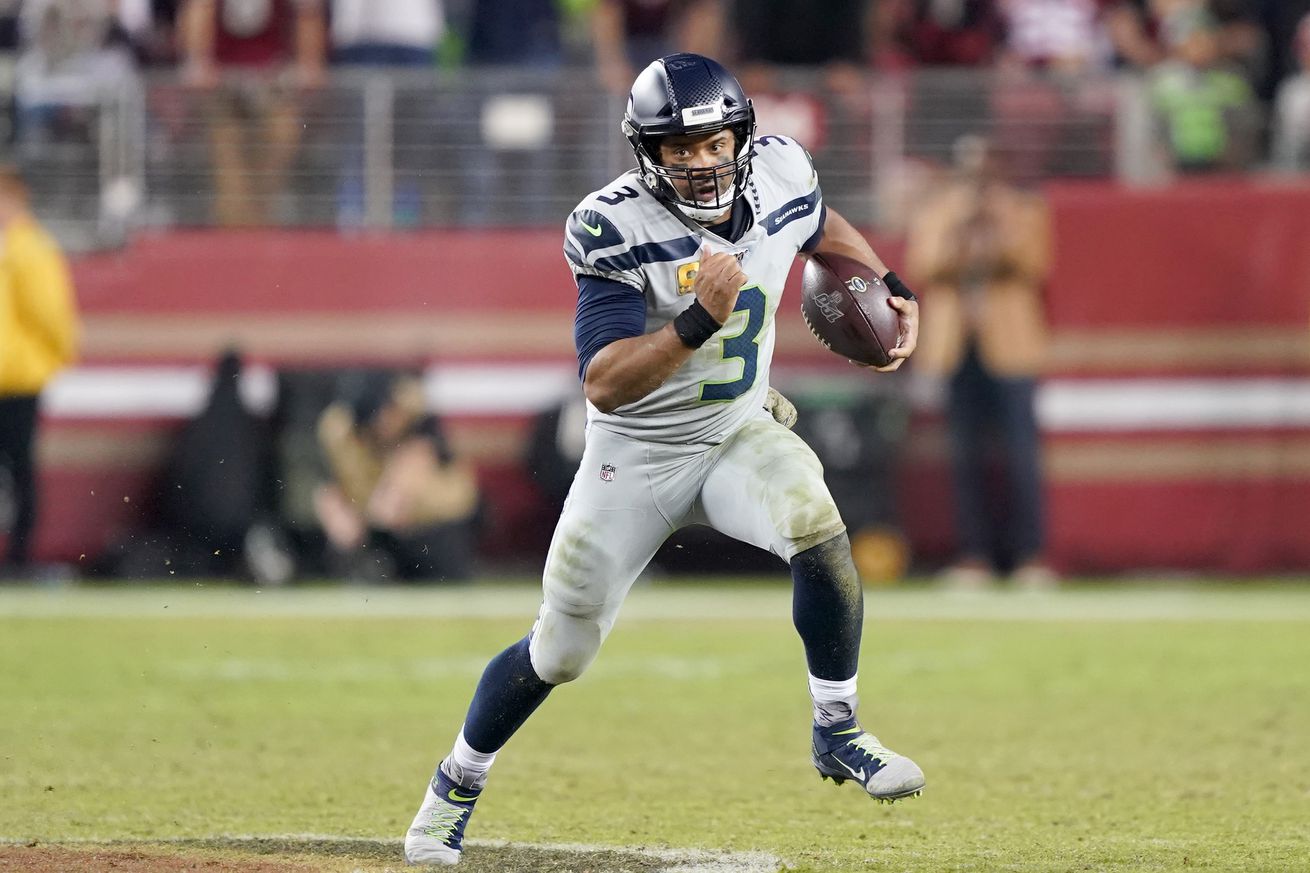 No team has more wins in one-score games than the Seahawks. That’s not always a good thing.

The 2019 season went relatively well for the Seahawks, even if it didn’t end with a spot in Super Bowl 54. Russell Wilson had another great season and the team made it to the Divisional Round of the playoffs.

The year could’ve gone better if the team could just win a game by a comfortable margin.

Even a 17-9 win over the Eagles on Wild Card Weekend that was dominated by Seattle stayed much closer than it needed to be. Philadelphia had Josh McCown playing most of the game and the Seahawks still couldn’t pull away.

And yet, the Seahawks did a whole lot of winning. Tossing themselves in the blender every week wasn’t too bad.

Seattle improves to 11-2 in one-score games including playoffs this season.

The Seahawks tie the 2015 Broncos for the most one-score wins in a single season including playoffs all-time. That Broncos team went 11-3 en route to a Super Bowl title.

“I think people tend to get comfortable, and that’s the part we need to take out of our game,’’ Seahawks cornerback Shaquill Griffin told the Seattle Times after an unnecessarily competitive win over the Falcons in Week 8. “Awesome start. The start of the game was terrific. Let’s finish the same way. When you’re able to finish games the same way you start, that’s when teams become great, and that’s what we’re trying to get to.”

That quote from Griffin came days before the first of back-to-back overtime wins to start November. They never did figure it out.

Almost every Seahawks win during the 2019 season was decided by one score. It’s not a new phenomenon, either. Seattle’s been doing it for years. The Divisional Round loss to the Packers was the 83rd game decided by one score in the last eight seasons.

Here are all the times they walked that tightrope in 2019:

In hindsight, that’s a wild final score when you consider the Seahawks have established themselves as one of the NFC’s top contenders and the Bengals still haven’t won a game. Then you dive into the box score and see that the Seahawks had no business winning at all.

Cincinnati finished the game with 429 yards of total offense compared to the Seahawks’ 233 yards.

Three fumbles lost by Cincinnati proved the difference in the game. The Seahawks found just enough running room late in the game to milk the clock and eke out a win to start the year.

Unlike the season opener, the Seahawks were the team that dominated statistically in Week 2. Seattle outgained the Steelers 425 yards to 261, and faced backup Mason Rudolph in the second half after Ben Roethlisberger suffered an injury.

Two fourth-quarter touchdown passes from Rudolph made things uncomfortable, though.

With 5:37 left in the game, one of those touchdowns made it a two-point game. Then the Seahawks earned four first downs on the subsequent drive and never let the Steelers touch the ball again.

The only one-score game with Seattle on the losing end barely qualifies as such. The Seahawks were trailing 27-7 at the beginning of the fourth quarter and got three touchdowns late.

The last touchdown came as time expired, cutting the score from 33-21 to 33-27. The game wasn’t close at any point after halftime.

This game was a slugfest from start to finish, with both teams trading blows. Los Angeles took a 26-21 lead with two Todd Gurley touchdowns in the third quarter. Then, Seattle snatched back the lead with 2:34 left in the game via a 5-yard touchdown pass from Wilson to Chris Carson.

The Rams set up a game-winning try in the final seconds, but Greg Zuerlein missed from 44 yards.

Seattle ended up with more total yards, fewer penalty yards, and more first downs than Cleveland. The Seahawks intercepted Baker Mayfield three times and won the time of possession battle. Yet, they somehow trailed late in the fourth quarter.

A 1-yard touchdown for Carson with 3:30 left gave the Seahawks the lead and Mayfield’s third interception just a few plays later locked up the win. It helped too that the officials and Browns coaches teamed up to doom the Browns.

How on Earth did the Seahawks let the Matt Schaub-led Falcons only lose by a touchdown? Even worse, Seattle led 24-0 at halftime.

That’s when the Seahawks eased off the gas pedal and slowly let Atlanta back into the game. In the fourth quarter, Seattle was fortunate that Falcons running back Devonta Freeman fumbled in the red zone, kicker Jason Myers was able to connect on a 54-yard field goal, and a Falcons two-point conversion attempt failed. If any of those three results hadn’t happened, the Falcons would’ve had a real chance at stealing a win.

The first of two consecutive overtime wins came after the Seahawks allowed Jameis Winston to lead a 10-play, 75-yard touchdown drive in the final minutes. The Seahawks had a chance to win in regulation, but Myers missed a 40-yard field goal try.

Seattle got the ball first in overtime and never let Tampa Bay touch it. Wilson orchestrated a 10-play, 75-yard touchdown drive of his own capped off with a 10-yard touchdown pass to Jacob Hollister.

The 21-10 lead that the Seahawks had early in the fourth quarter should’ve been safe. Seattle had the ball, the 49ers’ offense was struggling to do anything, and the Seahawks only had to avoid stepping on a rake.

They promptly stepped on a rake. Offensive lineman Germain Ifedi inexplicably took the ball out of Wilson’s hands mid-sack, ran a few steps with it, then fumbled to give the 49ers an easy touchdown.

Seattle then cleared the way for the 49ers to complete the comeback by dropping several Jimmy Garoppolo passes that should’ve been interceptions.

In overtime, Wilson threw an interception near the goal line that could’ve cost them the game. Instead, the Seahawks survived by the skin of their teeth with a 42-yard field goal from Myers seconds before the contest was about to end in a tie.

Carson Wentz threw two interceptions and lost two fumbles in arguably the worst performance of his career. A fumble lost by Dallas Goedert made it five turnovers on the day for the Eagles. The Seahawks should’ve cruised to victory, especially with a 129-yard rushing performance from Rashaad Penny.

Not quite. Seattle shot itself in the foot with 12 penalties that totaled 90 yards. The Eagles were penalized just twice for 15 yards. The Seahawks also got a turnover of their own when Carson fumbled on back-to-back plays.

The latter frustrated even the perennially cool, calm and collected Wilson:

Still, it didn’t really come down to the wire. The Eagles scored their only touchdown with 20 seconds left.

A twice-deflected pass was intercepted and returned for a touchdown by the Vikings early in the game. But the Seahawks brushed themselves off and dug out of a 17-10 deficit at halftime with 24 straight points to start the second half.

Seattle had a 34-17 lead in the fourth quarter, and promptly tripped all over themselves to let Minnesota back in the game. First, the Seahawks left Laquon Treadwell wiiiiide open for a touchdown.

Then DK Metcalf fumbled on the next drive and the Vikings took advantage with another touchdown. The Seahawks punted on the next drive, but finally something went right and they got a defensive stop. Seattle kicked a field goal with 21 seconds left and escaped Monday Night Football with a seven-point victory.

Carolina scored a touchdown, forced a three-and-out, and scored another touchdown all within two minutes. The Panthers were dangerously close to getting another possession with a chance to win too. With just over two minutes left, the Seahawks had to convert a third-and-11 situation to avoid punting.

After scrambling around, Wilson found Tyler Lockett for 14 yards to extend the drive and wind out the rest of the clock.

The 49ers jumped out to an early lead and took a 13-0 advantage into halftime. But like all Seahawks games, it ended up becoming a nail biter.

Seattle clawed back with a touchdown late in the fourth quarter followed by a quick defensive stop. The Seahawks got the ball back with less than three minutes and drove to the 1-yard line. Then all hell broke loose.

The Seahawks took a delay of game penalty that backed them up to the 6-yard line. They threw a pass to the end zone that was clear pass interference that wasn’t called. And on a fourth down to win the game, tight end Jacob Hollister was stopped inches from the goal line.

The @49ers stop the Seahawks at the goal line to win the NFC West! #GoNiners pic.twitter.com/nyHKB9Tioc

A fitting cap to a regular season of wild finishes for Seattle.

A rematch of a Week 12 meeting happened in the same place and ended with the same exact score.

It probably should’ve been a much more decisive win for the Seahawks, though. Carson Wentz suffered a head injury in the first quarter and the Eagles were forced to rely on 40-year-old backup Josh McCown for the remainder of the game. He passed for 174 yards, but couldn’t get Philadelphia in the end zone at all.

Seattle didn’t take advantage. It still only won by one-score and needed a clutch play by DK Metcalf in the final minutes to avoid giving McCown one more chance to tie.

How the Seahawks only managed 17 points on a night when Wilson threw for 325 yards and rushed for another 45 is a head scratcher.

Seattle dragged what should’ve been a Green Bay blowout into a close game. The Seahawks trailed 28-10 late, but scored two touchdowns to cut into the lead and got the ball back with just under five minutes left.

A sack stalled the drive near midfield and the Seahawks opted to punt instead of trying to convert a fourth-and-nine. They never got the ball back. Aaron Rodgers converted two third downs, including one pass that was inches away from being a fourth down.

The ability to win close games is a good thing. The Chargers have been in 10 one-score games in 2019 and only won two of them. The Seahawks are the opposite, and that’s why they were one of the final eight teams of the year.

But Seattle played with fire when it turned winnable games into needlessly tight ones. In January 2019, the Seahawks were eliminated by the Cowboys with a 24-22 loss in the Wild Card Round. Seattle led that game in the fourth quarter.

At some point, the Seahawks need to keep their foot on the gas and not play down to opponents.