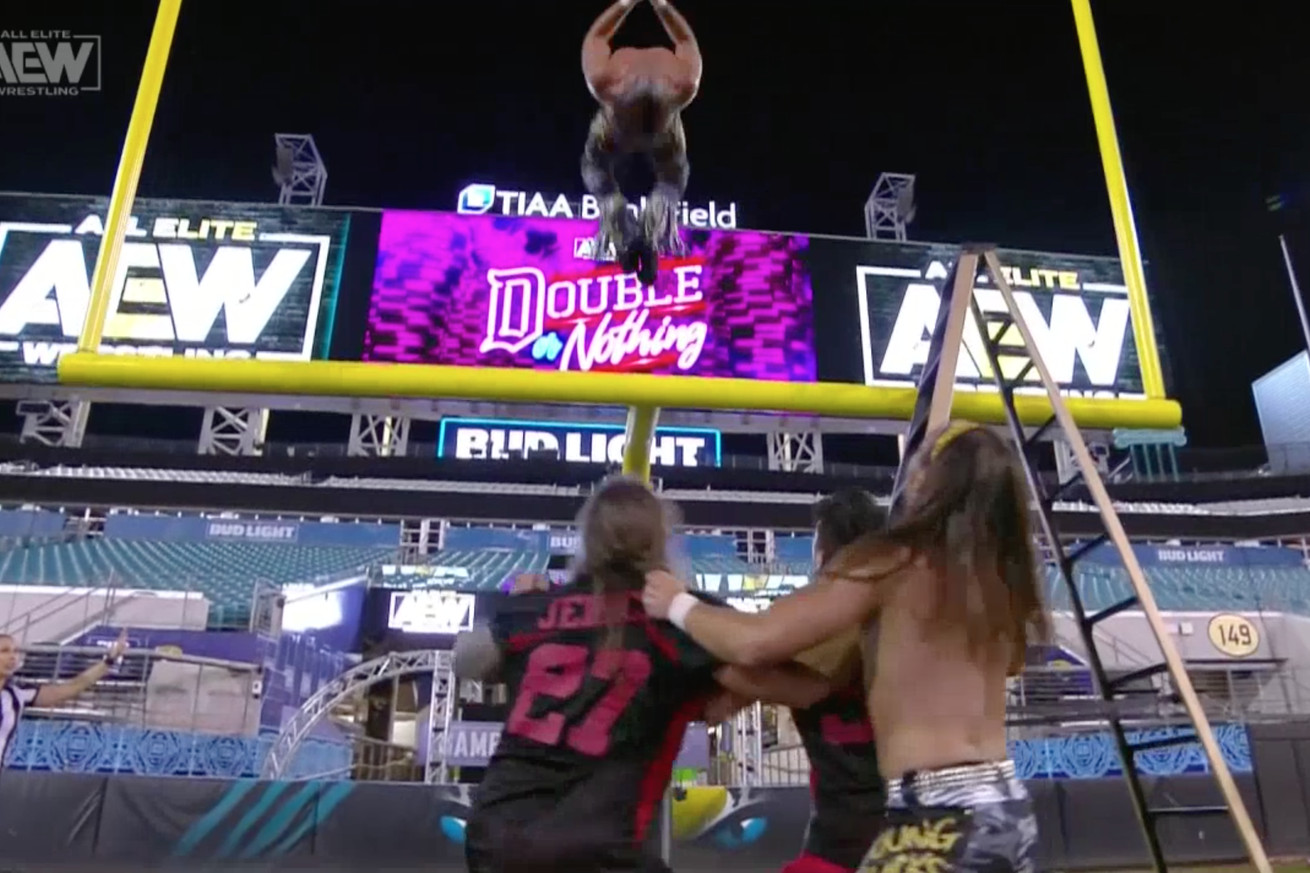 AEW held a giant brawl in the Jaguars’ stadium and it was glorious.

Professional wrestling is the only sport where you can show up on horseback, throw your opponent into a pool, and dive off an NFL goalpost. This week, James Dator and Hector Diaz look back at AEW’s Stadium Stampede Match, which featured 10 wrestlers facing off in an empty TIAA Bank Field.

James Dator: Everything about the Stadium Stampede Match was so perfectly ridiculous. I’ve been watching wrestling for damn-near 30 years, and I can’t recall the last time I had a grin from ear-to-ear for an entire match.

Hector Diaz: Having a wrestling match in an empty NFL stadium is inherently absurd, so I’m glad they committed to the bit. We had one team, Chris Jericho’s Inner Circle, walk out as if they were football players complete with matching uniforms. The ring was set up at the 50-yard line with the end zones painted with the team logos. The Jacksonville Jaguars mascot, Jaxson de Ville, showed up and get beaten up by a wrestling legend. And we even had one wrestler, Adam Page, make his grand entrance by walking out of the tunnel on horseback.

JD: I love how everything was broken up into vignettes. We had all these weird sub stories baked into a wrestling match — and while some of them didn’t make sense (like Page and Hager having a drink together) my belief was sho wholly suspended I just enjoyed the ride. Having a ring in the middle of the field felt like it was there because it had to be. Not like anyone wanted it there. This is all before we get to the fourth-wall chattering “Matt Facts” chyron, which somehow Santana and Ortiz could read.

HD: The entire match is fantastic for that reason. It had something for fans who keep up with everything pro wrestling and for casual fans who could enjoy the zaniness of it all. Matt Hardy getting dunked into the TIAA Bank Field swimming pool and emerging as reincarnated versions of himself works well if you know his start as one of the Hardy Boyz and his evolution into Matt Hardy Version 1 in WWE. But if you don’t know Hardy’s career, you can still laugh at his maniacal breaking of the fourth wall while he gave the underwater camera a thumbs up while his Santana and Ortiz stick his head in the water. Reading the on-screen graphics worked so well by itself too.

On that note, the comedic MVP of this match is surely Sammy Guevara, right?

JD: Oh, absolutely. Let’s face it, they’ve struck gold with Sammy Guevara. It took a little bit of time for them to find a place for him, but looking back, placing him in The Inner Circle might be their MVP move as a company. Not only has he grown so much from working with Chris Jericho, but he’s the total package. Amazing in the ring, and really “gets it” outside of it. At 22 years old he has the skills of someone twice his age — and that’s a testament to his development. They can keep him in the understudy role for YEARS if needed, and whenever he emerges he’ll be a top star.

Honestly, I see all the Eddie Guerrero comparisons, which I understand, but to me his career trajectory is almost identical to The Rock when he was put in “The Nation of Domination” early in his career.

HD: That’s a pretty fair comparison though I have to say The Rock never got ran over by a golf cart on two separate occasions, ran away from a dang horse, or was dragged 100 yards on a football field via a series of Northern Lights Suplexes.

JD: Well yes, sure … if we’re going to get picky about it. What was your single favorite moment of the match?

HD: My favorite part has to be the incredibly cheesy moment between Adam Page and Jake Hagar. The two were supposed to be fighting it out and instead ended up at a bar to drink together in silence — until they realized they were supposed to be enemies. Then they actually threw hands and we got the fantastic moment of Hagar literally dragging Page across the bar counter as if it was a Slip N’ Slide. This was something out of a corny western and I couldn’t love it more.

And then there’s the added bonus of Kenny Omega showing up. He and Page kept grabbing nearby glass bottles and breaking them on Hagar’s head. Yes, the bottles were obvious movie props but that’s the point. The wrestlers know this is all ridiculous, so why not let the fans in on it just a bit more.

What was your favorite part of the match?

JD: It had to be Matt Hardy. It gave me the warm and fuzzies. We know he loves weird stuff. We know he loves to break apart wrestling and lampoon himself in the process — and while nothing he did we new, it was beautiful to see it on such a large stage with so many people who clearly bought in. It didn’t feel like he needed to convince the guys working with him to go with the weirdness, they were thrilled to. The looks of shock on Santana and Ortiz’s faces reading the Matt Fact that he could hold his breath for over 300 seconds was just beautiful.

It makes me excited to see what the future brings for his character in AEW — and he has a new drone friend!

HD: As much as we’ve been lauding the cheesy moments from this match, you also have to give credit to the wrestlers who did some high-flying moves. Matt Jackson climbed the goalpost and did a moonsault to the end zone. I never thought I would see something like that. And he did it with a broken rib!

That plus the match-ending move where Kenny Omega hit the One-Winged Angel on Sammy Guevara from the top of the tunnel to the field was tremendous.

JD: That One-Winged Angel was so terrifying and so perfect. You’re right though. We remember the cheese, because it’s unusual — but the wrestling itself was really solid on top of it all.

This wasn’t a sloppy, old-school hardcore match we saw during the Monday Night Wars. It was a really well wrestled match, which happened to have all the B-movie moments weaved in.

HD: And the B-movie moments are what has made pro wrestling stand out in the middle of this pandemic. Just look to what WWE did at WrestleMania with its cinematic Boneyard Match. Pro wrestling already includes some choreographed fighting, so the extension of that is transforming into an action movie. Having said that, it’s going to be hard to top the Stadium Stampede match.

JD: It was something really special. When you have a wrestling match you want to show to non-wrestling fans you know you’re onto something. I watched with a group of friends, one of whom doesn’t care about wrestling at all, and she came away from that match laughing uncontrollably and saying “I get it now.” That’s exactly what you want.

Top to bottom it was a really great show. Stories are set up for months now, and I’m dying to see what Brodie Lee does next, where the TNT title goes, and how the women’s division shapes up with Shida as champion. It was all *chef’s kiss.*