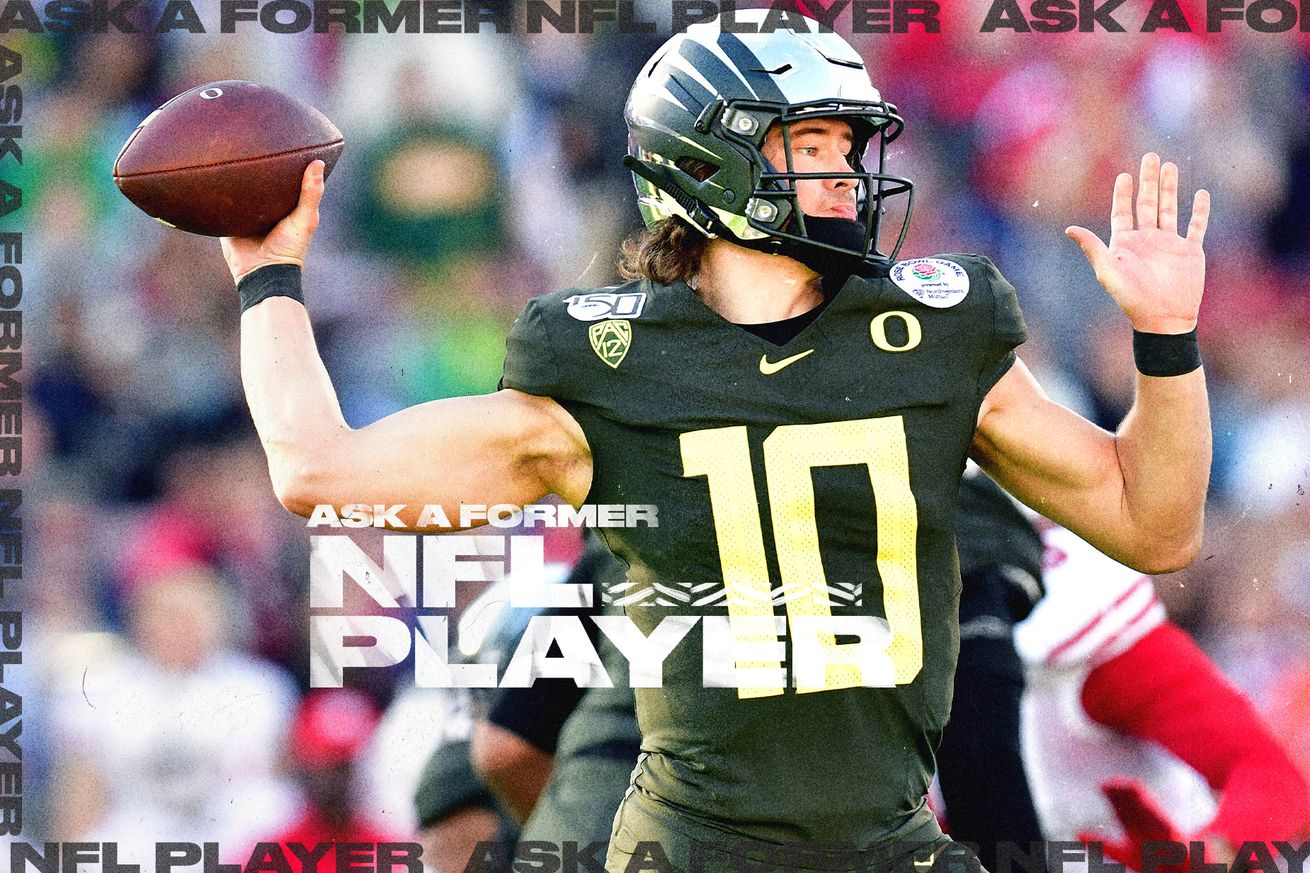 Justin Herbert won’t be the first quarterback drafted but he should be a top-10 pick.

In this week’s mailbag, Geoff Schwartz discusses the Chargers’ options at QB, what will happen with Nick Foles and the Jaguars, and the question he keeps getting asked.

Happy Valentine’s Day folks! I hope you’re able to spend the day with a loved one. I’ll be spending it talking about football, which is my love.

So, on to the mailbag!

Will Justin Herbert go to the Chargers? I feel like he will be picked higher. Thanks, Geoff! — @H_Bomb1105

Another option is adding a free agent rental while drafting a young quarterback at No. 6. Lastly, they could draft a quarterback with the intention of starting that player almost right away.

If they do draft a quarterback at their current position, it will not be Joe Burrow or Tua Tagovailoa, as those quarterbacks will be gone by then. Next up, according to everyone including myself, is Oregon quarterback Justin Herbert.

Herbert has every physical gift you’d want in a quarterback: tall, thick, rocket arm, extremely intelligent, and tough. He lacks touch on his ball and there are questions about his leadership, which I think are nonsense. He played in a run-first offense with no professional level wide receivers. The route tree was boring and predictable. When Herbert got the chance to play with better options at wide receiver in the Senior Bowl, he was fantastic.

If Herbert is there at No. 6 — which I believe he will be as I don’t see a team trading up for him — the Chargers should take him. They are a fit for Herbert, who won’t have pressure on him to win now like other organizations. He can ease into the role. They have reliable weapons for him and hopefully an upgraded offensive line. The defense is good enough that Herbert won’t be forced to win games early for the team, either.

If you’re the Jaguars, do you do whatever it takes to get rid of Nick Foles and roll with Gardner Minshew? —@Frailblazer

Last spring, the Jaguars signed Nick Foles to a four-year, $88 million deal, with $50 million in guaranteed money. Foles played all of a single quarter of the first game before getting injured and missing half the season. Before Foles got hurt, he threw an awesome touchdown pass and he looked the part, even if his playing time was short. When Foles returned, he looked like a shell of himself and was eventually benched.

Rookie Gardner Minshew, who took over for Foles, is a fantastic story. He transferred a few times in college and ended up at Washington State for his senior season. He set a bunch of records and was a late-round draft pick.

When Minshew was inserted into the lineup after the Foles injury, the NFL fell in love with him. He plays with his hair on fire and has a passion for the game that people enjoy. Minshew won some games, and it got people excited. Jaguars fans were ready to move on from Foles. Not so fast, folks.

If you dig into the numbers and film, Minshew was just average compared to the rest of the league. He was near the bottom in the NFL in QBR and Pro Football Focus graded 18th out of quarterbacks with at least 50 percent of snaps. Now, when you take into account he was a rookie coming from an air raid offense with plenty of room to improve, this can all be a positive. However, if Foles is healthy, he’s better. Plus, the Jaguars paid him for this season and his contract isn’t very trade-friendly. I don’t think we will see much of Minshew Mania in 2020.

What’s the dumbest question that you get asked frequently? —@jake7987

“Is this holding?” LOL. I get some version of this all the time and when I answer, people don’t give a shit. They just want to argue. I explain what holding is and why it wasn’t called, and it doesn’t matter at all.

And honestly, I don’t understand why people wouldn’t listen to me and learn, then be more informed fans. If a doctor told you something, you’d listen because he’s an expert in something you don’t know about. But I tell you something about offensive line play, I’m the moron and you’re right. So funny.