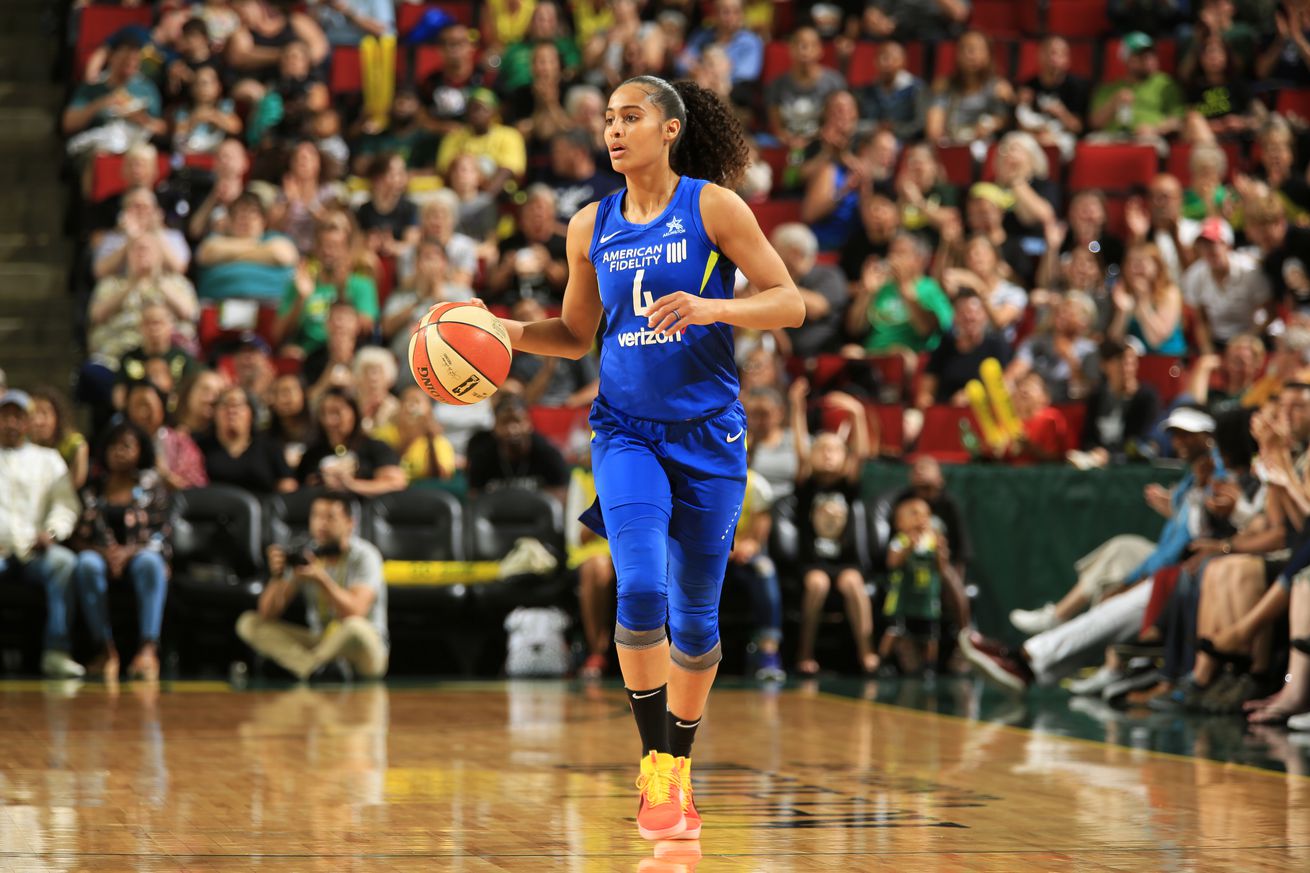 Four WNBA All-Stars have already moved teams, and the league looks stacked heading into the 2020 season. But there will be consequences, too.

During the first four days of the open signing period for WNBA free agents, four all-stars went elsewhere to create six stacked title contenders. That could usher in the most competitive season in the league’s 23-year history.

This winter’s chaos is all thanks to a new collective bargaining agreement that better facilitated player movement. Offseason buzz surrounding the league that lacks interest outside of the summer months of the season has been a helpful byproduct of it all.

Free agency 2020 is adding drama to a league that’s lacked team and player rivalries for the two decades it’s been around. There’s flexibility in offseason negotiations, forcing teams to make tough financial decisions and show players how they’re really valued. The WNBA is finally starting to create the off-court theatrics its NBA counterpart has used to drive year-round interest in the sport.

What caused the change in this free agency period?

Gone are the days where superstars and quality starters make the same paltry salary. Thanks to the new CBA, the maximum player salary rose by nearly $100,000 this offseason for those who qualify for a supermax contract and more than $60,000 for a regular max salary. Players with six years experience in the WNBA or more qualify for the supermax salary, which starts at $215,000 in the first year, and is only eligible for players re-signing with their current teams. (In 2021, player will be eligible with five years experience.)

This means there’s room for stars to actually negotiate, and they can now separate their salaries from those a tier below them. Player agents and teams have had a lot to fight for with the salary cap dramatically spiking by more than 30 percent this winter. Last year, teams were allowed to pay out $996,000 in player salary. In 2020, that has jumped to $1.3 million, a number artificially determined in the new CBA. This entire offseason is unprecedented.

The new world of WNBA possibilities has created tension between teams and their aging or unhappy stars, and required bold franchise decision-making. DeWanna Bonner, a three-time all-star who has played her entire 10-year career with the Phoenix Mercury, chose to leave and compete for the Connecticut Sun, finessing a sign-and-trade deal to allow her to earn the supermax salary and then change teams. Four-time all-star guard Skylar Diggins-Smith, like Bonner, used her leverage to leave the Dallas Wings and play in Phoenix with supermax pay.

On the flip side, the Atlanta Dream chose not to use the core player franchise tag to pay five-time all-star Angel McCoughtry a supermax contract, allowing her to sign with the already-loaded Las Vegas Aces. The defending champion Washington Mystics chose to undercut 33-year-old point guard Kristi Toliver in negotiations, so she chose to leave and get paid three guaranteed years at the maximum salary with the Los Angeles Sparks.

Not only will the 2020 season be stacked with ultra-competitive teams, but there’ll be an additional layer of drama when these players return to play against their old clubs.

Will this offseason movement change the quality of WNBA basketball?

Absolutely. Welcome to the WNBA’s superteam movement. Free agency isn’t over yet, but half of the league can consider itself in title contention.

There are only 12 teams in the league. Eight of them make the playoffs. Six of those teams will have to play at least one single-elimination game. The season’s only 36 games long.

If everyone stays healthy, the playoff race is going to be intense. The 2020 season is going to feel like no other.

There will be consequences to all this madness, though

Some have compared this offseason to the NBA’s in 2016, where major salaries were doled out as the salary cap went through a one-time spike of nearly 35 percent. That ended with notoriously brutal contracts, like Timofey Mozgov’s four-year, $64 million deal with the Lakers, Ian Mahinmi’s same contract with the Wizards, and many more.

We don’t know which contracts will look silly, but we can guess. Bria Hartley, a guard who averaged just 10 points on 38 percent shooting with the New York Liberty last year, was signed by the Mercury at the same price as 2018 WNBA MVP Breanna Stewart, along with an extra guaranteed year, according to Howard Megdal of High Post Hoops. The Sparks signed Toliver to the same contract as Hartley despite the 33-year-old being in the back end of her career and beset by injury for nearly half the 2019 season with the Mystics. The Aces signing McCoughtry to a two-year guaranteed max after she missed the end of 2018 and all of 2019 to knee injuries is also risky.

Star movement should continue in the future, but maybe not how teams want it

The decision not to smooth the salary cap means players lucky enough to be free agents this year will earn more than their normal worth while other All-Stars stay on maximum contracts under the old CBA. Howard, one of last year’s MVP candidates with the Storm, will make less money than Hartley. So will the 37-year-old Taurasi, arguably the best point guard of all time. The varied mix of new and old CBA contracts have temporarily allowed for the stacking of superstars.

But don’t expect this trend to continue. Next season, the salary cap will rise by just $39,000, which is just three percent of the current cap. Yet the WNBA still works under a hard cap, meaning teams can’t sign their own free agents above the salary cap like they can in the NBA. More movement is to come, but maybe not the kind of movement fans will want.

Star players will need to be paid, and many teams will have trouble doing it while staying under the cap. For example, should Cambage sign for the supermax, the Aces will have her contract, Dearica Hamby’s max under the old CBA, and McCoughtry’s max contract total 40 percent of the cap in 2021. Retaining both McBride and Plum as free agents will be nearly impossible, especially with Wilson eligible for a supermax deal the summer after. That’s the balancing act several teams must navigate.

Fans of teams who swung and missed on Bonner, Diggins-Smith, McCoughtry, and Toliver this summer might feel a lot better in a year’s time. Teams stacked with too much talent to pay will have limited places to move them. There are only 12 teams in the league, and most teams are spending away this offseason. That means top talent could be had in the future at a minimal expense.

The W is a small league that already excludes incredible talent based on its size alone. While the NBA can give 450 jobs across 30 teams at one time, the WNBA, despite a similar crop of college and overseas talent, can only field 144 players at the most. There are only 12 teams, and each can hold a maximum of 12 players. Now, teams might not even hold that many.

This offseason, teams are spending cap money ferociously on top-tier players. The Mercury and Aces in particular are already showing they’re prepared to stack maximum contract deals. With the hard cap in place, that means they’re not likely to pay market-value deals to flush out their depth with Sixth Woman or quality-level bench types, as they’ll be asking for more than the $68,000 veteran’s minimum. These teams are going to be targeting incoming rookies or vet minimum players. In some cases, teams might only keep 11 players instead of the maximum 12 to save a few bucks.

What happens to quality supporting players like Atlanta’s Alex Bentley or Las Vegas’ Sugar Rodgers now? They won’t get the financial leap the CBA promised superstar players, that’s for sure. Will they find a home at all?

These veteran players are crucial to good teams, but will they accept a pay cut in a system that already undercuts them, or do they just walk away and play overseas? Tierra Ruffin-Pratt, a seven-year vet who started 33 games for Los Angeles last year, is the best example of this dilemma. She re-signed with the Sparks for $90,000 this year, which is just $33,000 more than an incoming rookie.

Not everyone will even get that opportunity, and some might not even want it.

Related Itemsfeaturednbasb nation radio
← Previous Story The 2020 NBA Celebrity All-Star game is full of people from Chicago
Next Story → Chicago Bulls fans have quit on the team, and it’s showing during All-Star Weekend